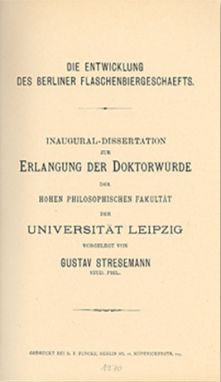 Gustav Stresemann, son of a Berlin beer merchant, advanced as a politician of the German People's Party to become Chancellor of the Reich (1923). He was awarded the Nobel Peace Prize in 1926 for his work as foreign minister of the following governments.